Anyone who cares about truth and consequences ends up in debate. We must, by necessity, hammer out our beliefs and ideas through argument with people who disagree with us. The internet has provided us a miracle in this regard: we can now find persons with virtually any and every possible intellectual claim in the world.

We also may find ourselves challenged by those people to take a closer look at our own characterizations of our own position(s). We naturally think we know our own beliefs better than could our opponent in a debate, but I think you ought to pause and examine that. Here is a wise word from the comment section of a post at Green Baggins (a great Reformed blog with a glorious past). Check this out, think about it, and maybe let these words come back to you next time you’re in the heat of debate. It might be a strength for you to learn to listen to others and analyze yourself better.

Just dropping by . . . it seems to me there’s a twofold assumption here on the part of Nathan and art which is, in fact, somewhat dubious: a) only someone who holds a position can accurately define that position, and b) their definition must necessarily be accepted as accurate. To be sure, one must always be careful, in arguing against another’s position, to do so fairly and accurately, without replacing one’s opponent with a straw man; but that doesn’t change the fact that none of us can see our own face without a mirror, and in an argument, the only mirror we have is our opponents. There are times when, in fact, those who argue against us can actually perceive our positions more clearly than we ourselves can, because they see implicit/unexamined assumptions which we don’t see, or because they catch logical implications of our position which we haven’t caught. As such, to say “I don’t agree with your characterization of my position, therefore you aren’t addressing my position” is not, in fact, necessarily true. It is, rather, a reason for careful self-examination to see if, perhaps, someone else might have seen something in our position which we ourselves have missed. 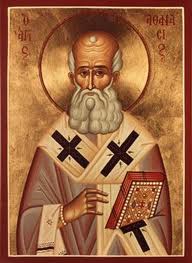 Athanasius (c.297-373), my favorite early church father, fought heretics with all of his soul. I am brought to tears reading his glorious writings. Please indulge with me each Tuesday as we sit at the feet of our forefather in the faith – a warrior for Christ who relentlessly pursued truth in all the churches.

Was it wise of the Father to let His Son Jesus be publicly humiliated and crucified? Did it really prove anything?

All these things the Savior thought fit to do, so that, recognizing His bodily acts as works of God, men who were blind to His presence in creation might regain knowledge of the Father. For, as I said before, who that saw His authority over evil spirits and their response to it could doubt that He was, indeed, the Son, the Wisdom and the Power of God? Even the very creation broke silence at His behest and, marvelous to relate, confessed with one voice before the cross, that monument of victory, that He Who suffered thereon in the body was not man only, but Son of God and Savior of all.

The sun veiled his face, the earth quaked, the mountains were rent asunder, all men were stricken with awe. These things showed that Christ on the cross was God, and that all creation was His slave and was bearing witness by its fear to the presence of its Master.

Thus, then, God the Word revealed Himself to men through His works. We must . . . consider the end of His earthly life and the nature of His bodily death. This is, indeed, the very center of our faith, and everywhere you hear men speak of it; by it, too, no less than by His other acts, Christ is revealed as God and Son of God.

1,700 years later, the crucified Man who is God is still the very center of our faith – timeless, objective, and powerful. Be sure to meditate on these things without ceasing, my friends.

The Citizen Writes About:

Christian Thinking at its Best

Thoughts on how to discover God, become more like Jesus, and engage the world

Applying biblical truth to social, cultural, political, and theological issues in our world.

Suaviter in Modo, Fortiter in Re

The Citizen of New Jerusalem Podcast

lindaBornAgain....glorifying Him until I see Him face to face

Walking with Jesus Christ, day by day, one step at a time

“We have a powerful potential in our youth, and we must have the courage to change old ideas and practices so that we may direct their power toward good ends.” - Mary McLeod Bethune

Steak and a Bible

Food for the body and soul, but mostly the soul.

"I am not mad...but speak the words of truth and reason."

Thoughts Along the Way

My life of Hope in Christian community.

Using the pearls of His wisdom and the light of His truth to protect us in this world. Glory to the Father, to the Son and to the Holy Spirit. Amen.